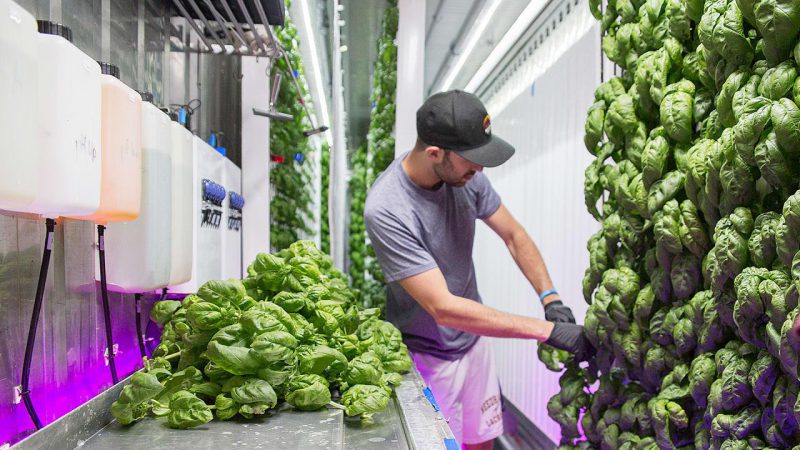 • What makes urban farming a trend now? How sustainable will it become? Is it now?

• Read about how to sustain the practice of urban agriculture.

In a parking lot outside a former pharmaceutical factory in the Brooklyn neighborhood of Bedford-Stuyvesant, 10 entrepreneurs have spent months learning how to take on the industrial food system through urban farming.

With a new round of $5 million in seed funding, led by the Collaborative Fund, the accelerator is making plans to build new, larger campuses in other cities.

In the program, each entrepreneur is temporarily given a single upgraded shipping container, filled with vertical growing towers, irrigation systems, and red and blue LED lights in a spectrum tuned to help grow greens. Then they spend roughly a year learning the skills to grow food–no prior experience is necessary–developing business plans and working with coaches and experts to improve their entrepreneurial skills. By the end, in theory, they’ll be ready to launch an urban farming business of their own.

“So part of the engine that we’ve created here is that by training these young people…at the end of that program, they’re armed with the tools that they need to go out and set up their own food business. The hope is there will be tens of thousands of new businesses that end up being formed.”

As they grow and sell greens during the program, the entrepreneurs make money; the accelerator keeps a portion of the profits to fund itself. “Our incentives are aligned,” he says.

Learning with others and benchmarking are key steps towards becoming an impact giver. If you are interested in giving with impact for Food and Nutrition, take a look at these events, galas, conferences and volunteering opportunities to connect with individuals like you.