Why More STEM Pros Are Ditching the Office For the Classroom 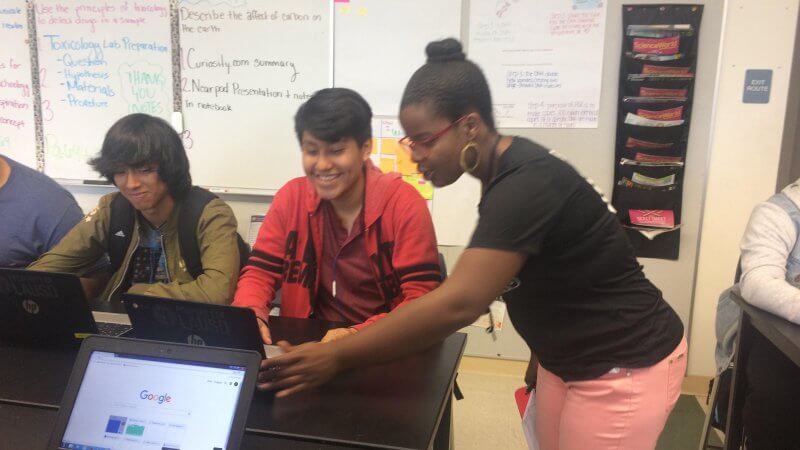 • Edsource writes about a growing number of math and science professionals who are leaving research work behind to teach in high schools. There’s a nationwide shortage of such teachers, so accreditation is fact-tracked and some universities are even exploring loan forgiveness for those who want to go into teaching.

• While these STEM pros are still a small percentage of the overall pool, it’s worth noting the enthusiasm and industry knowledge they bring to the profession, especially in an age where workforce training will continue to require math and science skills. Should nonprofit education initiatives look into recruiting more?

• It’s not just people coming to the classroom from Silicon Valley — it’s money, too. A lot of it.

Two years ago, LaTeira Haynes was working in a quiet laboratory at UC San Diego finishing up her doctorate in biomedical engineering. Now, she’s teaching a 9th-grade biology class in South Los Angeles that is so large she uses a microphone to be heard over the constant din of teenage chatter, rustling worksheets, the zipping and unzipping of backpacks.

But to her, there is no sweeter sound.

“These students are here. They want to be here. I want to be here,” said the energetic second-year teacher, her hair pulled back and her hoop earrings flashing. “I have 47 kids in this class and 44 of them are here today. That’s huge.”

The neighborhood where Dymally High School is located has only 3.6 percent of adults age 25 or over who have a four-year college degree. That’s a long way from the seaside bluffs of La Jolla, where Haynes was studying immune cells and mulling a career in research. But Haynes said Dymally is a perfect fit for her, and teaching high school is a far more rewarding career than working in a lab.

Named a rookie-teacher-of-the-year in Los Angeles Unified last year, Haynes, 30, is among a growing number of science, technology, engineering and math professionals in California who’ve forsaken the comforts of laboratories, office parks and six-figure salaries to teach high school, often in schools with a majority of students living in poverty, learning English or facing other challenges.

Read the full article about math and science professionals leaving office work behind to teach by Carolyn Jones at edsource.org.