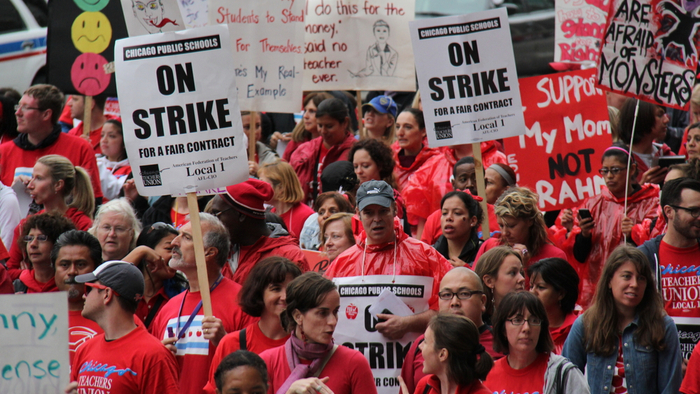 2018 may go down in education history as the year of the teacher strike. Statewide teacher walkouts in six states this past spring pointed the way to continued unrest this fall. Teachers in several districts forced a late start to the school year by taking to the picket lines on day one.

Now, teachers in the nation’s second-largest district, Los Angeles, are heading to the picket lines.

It is clear that we have arrived at a tipping point nationally. But why? What is driving the strikes and why are they happening now?

Today most individuals and most states have recovered fully from the recession of 2008 and are experiencing a strong economy. In the vast majority of locations however, schools are experiencing the opposite. Much of the strike coverage has focused on the specifics of how teacher wages have been stagnant for almost 30 years in real dollars and how teacher pay has increasingly fallen behind that of comparably educated professionals. However, the complete picture is only clear when you zoom out beyond teachers themselves. Teachers are fighting for their students and the schools they inhabit.

Thirty-four states spend less on education than they did a decade ago, with some spending fully 20 percent less. While research makes clear that it takes more funding to equitably educate students in schools serving disproportionate numbers of disadvantaged kids, only 12 states send more money to low-income districts than they do to high-income districts. Districts serving high percentages of students of color receive less funding on average than districts serving the fewest Black and Latino students. If we aspire to give all students, especially low-income students and students of color, access to a high-quality education, schools in most places need greater resources. Period.

In June 2018, the U.S. Supreme Court significantly curbed union organizing power. In Janus vs. AFSCME the court ruled that public employees (e.g. teachers) did not need to pay fees to unions that represent them at the collective bargaining table1. Many were predicting the end of unions as we know them.

Instead: Enter a revolt of tens of thousands of teachers in states that have historically had the weakest unions and weakest organizing capacity.

That strikes occurred in so many union-optional states this spring is both surprising and instructive. A set of important themes has emerged:

In sum, the strikes point to a trend in battles over resources that is unlikely to end soon. When these battles do end, it is likely that school budgets and teacher salaries will see gains.

In their day-to-day classroom life, teachers don’t typically rate unions as top-of-mind. However, public attempts by perceived adversaries to take away teachers’ collective power awakened a sleeping giant. It appears that the Janus ruling has many teachers rethinking the need for a collective voice.

What Can Philanthropy Do?

Look Beyond the Simple Narrative

Teacher salaries are the biggest piece of the school budget puzzle so it may appear that teachers are simply self-interested when they strike. I’d argue that they are fighting for the very future of public education and that their case has a strong basis in reality. Stories of teachers spending their own income for supplies are really a story of students in need and school systems squeezed beyond their limits.

Philanthropists have been plugging the gaping holes in school operating budgets since the recession, offering schools their only opportunity to innovate and go beyond basics. It is time for government to take back that basic responsibility to adequately fund schools. Collective action by philanthropic leaders is needed to elevate the voices of those whose needs are the greatest and to join them in the fight.

Empower a New Generation of Teachers in Leadership Roles

There is a new generation of teachers gaining a voice in policy and it is a departure from the old-school union mold. More than 500 current teachers (and even greater numbers of former teachers) are running for elected office on local school boards. Help them with access to leadership training programs to ensure that the future of the profession is led by smart, policy-savvy teachers.

1. In the year leading up to the decision, the threat the case posed to unions and the likelihood that the ruling would go against them had been top of mind for teachers across the country.
____

Original contribution by Celine Coggins, Incoming Executive Director of Grantmakers for Education. She teaches a course on Teacher Voice and the Labor Movement at the Harvard Graduate School of Education and previously ran the nonprofit, Teach Plus.

If you are interested in Education (Other), please see these relevant events, training, conferences or volunteering opportunities the Giving Compass team recommends.