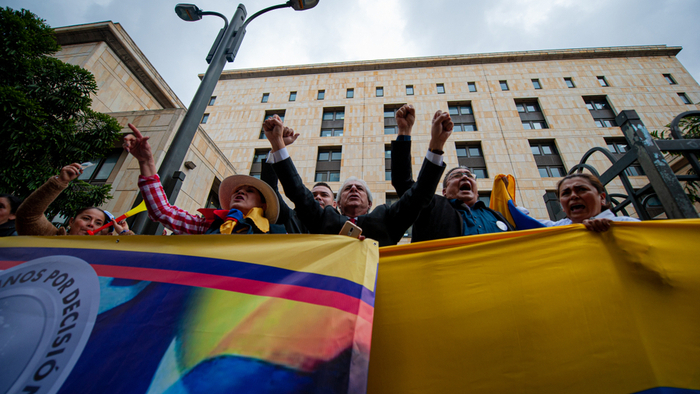 • Hundreds of thousands of protesters (students, unions, and indigenous groups) gathered in the streets of Bogota, Colombia to protest against the country’s right-wing government of Ivan Duque.

• How will this protest encourage real change? The scope of the problem will require multiple cross-sector partnerships to address, with things only getting worse over time.

• This article shows why, to many in Colombia, peace feels like war.

Bogota, Colombia – Hundreds of thousands of protesters marched through the dense city streets of Bogota and other cities across Colombia on Thursday as the country joined a wave of others in South America experiencing anti-government demonstrations.

Protesters sent out a unified cry against the right-wing administration of President Ivan Duque, whose approval ratings have plummeted amid an uptick in violence, a flailing peace process and general unrest country-wide.

What began as a peaceful demonstration, and one of the biggest in recent years, had descended into chaos by the end of the day. Police clashed with protesters throwing rocks and bottles and a cloud of tear gas hovered over the city centre.

“They’re throwing tear gas and dispersing, abusing the people,” protester Milena Riano shouted over loud crashes and the roar of the crowd running from police in riot gear. “I’m so scared because I have kids.”

Civil society groups opposing economic reforms by Duque’s right-wing government announced the strike last month. But after weeks of protests in Chile prompted by continuing economic inequality, unrest in Bolivia and riots in Ecuador, Haiti, Venezuela and Brazil, the day morphed into something more potent; an accumulation of growing woes against the Colombian government.

Read the full article about protesting against the Colombian president by Megan Janetsky at Al Jazeera.