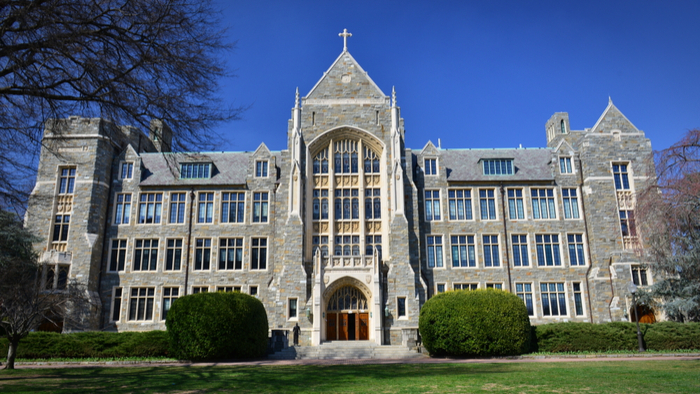 • Andre Perry reports that Georgetown University students will be the first in the country to directly pay reparations to the descendants of slaves sold by the university.

• How can other institutions follow the lead set by Georgetown? What additional work does Georgetown need to undertake?

• Read about the need for racially diverse student bodies.

On April 11, Georgetown University students voted overwhelmingly to approve the addition of a $27.20 fee to tuition costs each semester to help pay reparations to the descendants of the slaves the university sold in the 1830’s to pay off its debt.

It’s been a long time coming. While the university’s grim history has been known for years, it was only in 2015 that Georgetown President John DeGioia announced the formation of a Working Group on Slavery, Memory, and Reconciliation to “establish a dialogue on Georgetown’s historical ties to the institution of slavery.” That November, student activists staged a sit-in at the president’s office, asking that the university atone for its past. Demands that the university rename Mulledy Hall and McSherry Hall, named after the two men who orchestrated the sale of the enslaved people almost two centuries ago, and that Georgetown establish an annual program focused on education were among the students’ goals. In April 2017, the university publicly acknowledged and apologized for its role in perpetuating slavery and renamed the two buildings. Isaac Hawkins Hall is dedicated to the first enslaved person listed in the 1838 bill of sale. The Anne Marie Becraft Hall is named after a pioneering 19th-century black educator who opened one of the first schools for black girls. Georgetown also extended preferential admissions to the descendants of those 272 slaves.

Georgetown’s students have taken atonement to the next, appropriate level by compelling the university to redress past wrongs in a much more substantive way through a program for reparations, which are direct financial payments to the descendants of the enslaved. Though many universities have begun to study the role of slavery in their history, few have made significant strides in transitioning from research-based work to turning their findings into tangible action. If implemented by the university, Georgetown’s program will be the first of its kind.

Read the full article about Georgetown University by Andre Perry at The Hechinger Report.