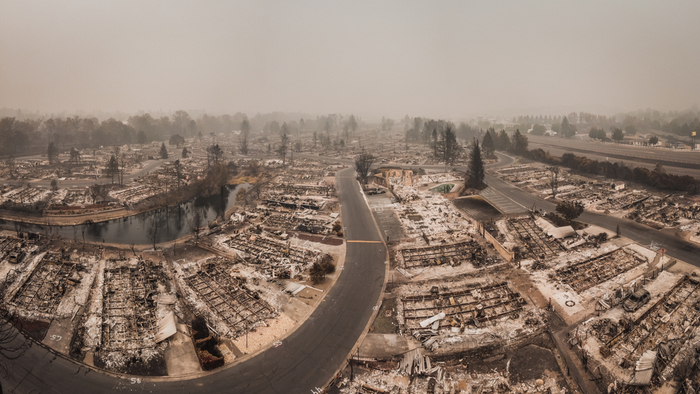 The heavy wind woke Niria Garcia about 5 a.m. It whipped against her home, leaving her restless as she fitfully tried to get a little more sleep.

“Something doesn’t feel right,” Garcia thought to herself.

On that day last September, a devastating fire ripped through Southern Oregon, whipped by those very winds that woke Garcia, a Xicana climate activist based in Talent, a town of about 6,500 people. Three people would die and more than 2,800 homes and other buildings would be destroyed by the fire.

Later that morning Garcia heard that nearby Ashland was being evacuated. Around 11 a.m. Garcia looked out her window and saw that the wind still was not letting up. Then she saw the smoke.

“I’m not going to sit here and wait,” said Garcia.

It was only in Ashland, a wealthier area 5 miles down Interstate 5, that residents were told to evacuate, activists said after the fire. Jackson County’s emergency alert system left out many communities, they said, including Talent, a community with mobile home parks and other low-income housing and a median household income of $40,400. Ashland’s median household income is $56,315.

“People were clueless and our Spanish-speaking community was left out,” said Garcia in a recent interview. Damage would ultimately prove more extensive in Talent than in Ashland.

The racial and social disparities exposed by the September fire are emblematic of a broader picture: Communities of color, low-income people, and other marginalized groups are disproportionately impacted by the effects of climate change, according to community activists across Cascadia. From country towns like Talent to the diverse urban landscape of South Seattle, activists say the government is not yet fully hearing from the long-marginalized communities that are feeling the biggest effects of climate change. As climate change engenders more fires, floods, and other disasters that disproportionately affect communities of color, Cascadia is wrestling with how to protect these communities after a history of largely failing to do so.

Climate justice is not just about disasters, though. Located seven hours’ drive north of Jackson County,  Industrial South Seattle is one of the most diverse neighborhoods in Cascadia. It’s also one of the most polluted. It’s also an example of how communities of color are struggling to be heard as governments make plans to transition to a zero-carbon economy.

With air pollution wafting into many residents’ homes from diesel trucks making their way from the nearby Port of Seattle, and the Duwamish River declared one of the nation’s largest toxic-pollution Superfund sites, the area anchors a swath of high-pollution, high-health-risk areas. Those risks are identified in a map showing statewide environmental public health data from the Washington State Department of Health. The Washington Environmental Disparities Map reveals that both the Duwamish River Valley and Puget Sound rank high in environmental health disparities such as larger proportions of residents exposed to toxic soot.

All of that has consequences. Life expectancy in the Duwamish River Valley is 13 years lower than in wealthier neighborhoods in North Seattle.  The longstanding racial and ethnic inequities exemplified in South Seattle were central to the most significant example to date of the movement to decarbonize Cascadia running headlong into aspirations for people of color to be part of the so-called “just transition” to a carbon-free future.

“The transition to renewable energy offers an opportunity to generate community prosperity,” says Puget Sound Sage, a grassroots organizing group in South Seattle. “Our community needs the benefits of the transition to be reinvested back into our wallets, our neighborhoods, and our infrastructure.”

Puget Sound Sage surveyed the community to try to understand what residents thought an equitable transition to renewable energy would look like. The resulting report sought to speak the mind of the community. In her outreach, Yolanda Matthews, climate justice organizer with Puget Sound Sage, noted that community members were primarily interested in “having lower energy bills, having energy-efficient appliances, and keeping a roof over their heads.”

However, according to Matthews, the city thought that the South Seattle community wanted solar panels and incentives on electric vehicles. “The city tends to think that what works for one community will work for the other. That’s why we needed the report, to really prove what our community was thinking and needing,” said Matthews.

This article is part of our Climate Justice collection. Learn more about climate justice, or read the full article about inequality in Cascadia by Iris M. Crawford at Grist.