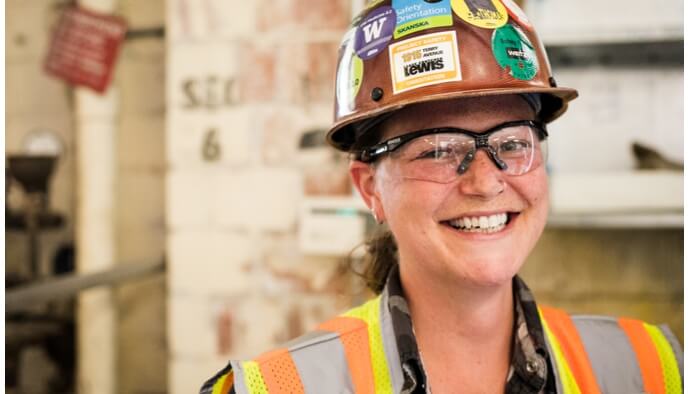 “I think of engineers as boys, but since there’s a girl engineer [in my classroom], it opens up my life so I can be one.” Mya, a fifth-grade student in Washington.  It’s moments like these that drive Washington STEM as we relentlessly pursue equity and representation in STEM.

In Washington state, roughly 740,000 jobs will be created by 2021 and a third of those jobs are within the STEM fields. The vast majority of those jobs will require competencies in STEM skills. We want to make sure every young girl and woman has the chance to take advantage of this coming wave of opportunity.

The fundamental skills established through a high-quality STEM education will serve those students regardless of their career path. Collaboration, creativity, cultural competency, problem solving, and a firm grasp of science, technology, engineering, and math (STEM), will prepare students for a 21st century economy.

And yet, so many young women may not see the STEM fields as places where they belong, let alone an area where they can grow and thrive. That’s why we’ve begun the Notable Women in STEM campaign.

The Notable Women in STEM campaign is one of our many initiatives to make sure STEM careers can be a reality for all students in Washington. We sent out an open call across the state to employers, education institutions, and nonprofits to highlight women who shine in the STEM fields.

These STEM rock stars are the basis for a series of profiles that celebrate the diversity and career paths in STEM that are available to all students in Washington. We know that in many cases students who can see themselves reflected in a career are far more likely to pursue that path. And we want every young girl and woman to know that STEM has a place for them.

Right now, we’re travelling across the state to interview these Notable Women in STEM and to hear their stories and create a profile that is true to who they are. The following examples are just a small slice of the amazing women we’ll be highlighting.

Tina Asiimwe is a nurse manager at Kaiser Permanente Rainier Medical Clinic. As a nurse manager, she has helped transform the medical center into one of the most improved clinics in Kaiser Permanente Washington. Tina is also a Ugandan immigrant who came to Seattle eleven years ago. She has chartered her own way in STEM and serves as a role model for any young woman thinking of pursuing STEM.

Allison Camper is a robotic engineer at McKinstry. Allison was frequently told how her assumed physical restrictions as a woman would prohibit her ability to work in the engineering and construction fields. Her response? “We just have to think about solving those problems in a different way.” When we speak of creativity in STEM, there’s no better example than Allison.