It’s Not Just a Fund for Women, It’s a Community

This four-part series amplifies research on women’s philanthropy through real-life stories and consider what women donors can apply to their efforts today. Part One. Read Parts Two, Three, and Four.

Earlier in her career at a staffing agency, Judy Bishop remembers when companies would call and specifically ask for a man or a woman depending on the position. Men were requested for strategic management roles and women for support jobs. While explicit bias like this is less common today, Bishop sees that companies still maneuver women and men onto different tracks at work, deepening gender and racial disparities.

“I have seen the pay gap for 50 years and I still see inequity every day,” Bishop said. “Those problems are always front and center for me. It’s part of my obligation as a woman to think of other women. We should be giving back.”

Bishop has been an advocate for women for more than five decades and a business owner “her whole life.” Now in her 70s, Judy owns a staffing agency in Honolulu and serves on the board of the Women’s Fund of Hawai’i. Recently, Bishop and I talked about what motivates her work toward women’s equality and she said, “The cost to raise a family is so high. Women are up at dawn, getting kids out the door, getting to work, always feeling like they’re not doing enough. I know economic parity would make a huge difference. Women could have a better life, better job, better food.”

Bishop’s sentiment -- women helping women -- was echoed in conversations I’ve had with women from across the country and in my own experience as a donor and staff member with a women’s fund in Washington State. Building community among women of diverse backgrounds and beliefs to lift up all women and girls is baked in to the DNA of women’s funds and foundations; how their mission is realized is central to the mission itself. 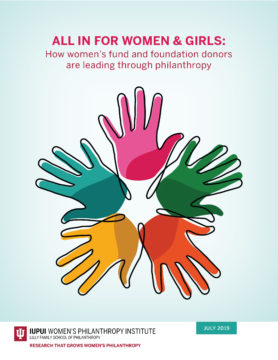 This hallmark of women’s funds and foundations is affirmed in a study published by the Women’s Philanthropy Institute, which conducts, curates, and disseminates research that grows women’s philanthropy. All in for Women and Girls: How Women’s Fund and Foundation Donors Are Leading Through Philanthropy tells the story of what sets donors to women’s funds and foundations apart from other donors – who they are, what motivates their philanthropy, and why they stay so committed to the cause.

While this might seem obvious, it is worth noting that donors to women’s funds and foundations are overwhelmingly women, but there’s even more depth to consider. Donors are often women who experience and witness gender and racial inequity firsthand. They’re also women who understand the benefits of self- and collective empowerment, which is a powerful motivator for their philanthropy. According to the research, donors to women’s funds and foundations are more likely to be women and LGBTQ individuals and less likely to be retired or religious than donors in general. Donors to women’s funds and foundations are more likely to agree giving to women and girls is the most effective way to improve society.“Raising money to be more pro-active in helping other women, this is where we need to be,” said Marivic Dar, a financial planner who serves on the board of the Women’s Fund of Hawai’i with Bishop. “There’s a lot to be done.”

Dar’s own story deeply influences her commitment to women’s and girls’ causes. Born and raised in the Philippines, she first came to Hawaii for higher education where she met and married her husband. After serving in the foreign service, the Dar family returned to Hawaii, where they raised four children. “Despite having a graduate degree and a glamourous career,” Dar stayed home with her young children. During those years she became isolated, her skills fell and her career lagged. Dar felt helpless and had an incredibly challenging time returning to the paid workforce.

Then, a woman tapped her to join the Hawaii State Commission on the Status of Women. Dar worked hard to reframe the commission’s focus on women as downtrodden victims to show women as powerful, mirroring her own growth and liberation.

“[I] went from being lost to knowing there is a way out,” Dar said.

Women’s funds also have a way of transcending age and generation. Olivia McCulloch, a rising junior at Bates College in Maine, bubbled over talking about how empowered she felt building community with the Women’s Fund of Western Massachusetts. Raised by two moms and surrounded by powerful female role models her whole life, McCulloch had a unique understanding of the issues facing women and girls. However, while she knew what inequality looked like, it took until college before she found the courage to speak up.

Last summer, Olivia produced a podcast series for the Women’s Fund of Western Massachusetts working with donors, grant recipients, and civic leaders to tell their stories. She literally and figuratively found her voice which only deepened her commitment to women and girls.

“It’s not just a fund for women,” said McCulloch. “It’s a community.”

There are more than 100 women’s funds and foundations around the world, making it likely there is one in your city or state. Find more information and get involved with the women’s funding community through the Women’s Funding Network.