NewsMatch: Donors Can Double Their Impact While Supporting Democracy

By Adina Berliant-McDougall, Associate Director of Strategic Partnerships at the American Journalism Project

As public trust in the media dips, hundreds of thousands of donors are banding together to strengthen nonprofit newsrooms -- organizations that are informing their communities, holding power to account, and laying the foundation for a healthy democracy. This time every year, the national grassroots campaign NewsMatch helps to double that support. Individual donations to a nonprofit news organization between Nov. 1 and Dec. 31 are matched, dollar for dollar by national and local funders.

More than 300 independent news organizations are participating in this year’s campaign. All are active members of the Institute for Nonprofit News (INN), a national partner of NewsMatch and membership organization that supports nonprofit, nonpartisan news organizations with public service missions.

“They are a part of their communities and they function in a way where there can be an ongoing relationship between the newsroom and the people that they serve,” said Courtney Hurtt, NewsMatch program manager and chief of growth programs at INN, on what distinguishes these nonprofits from the traditional newsroom model. “It’s an exchange, not an extraction.”

And NewsMatch is a powerful demonstration of the impact of individual donors in sustaining their work. Last year, the campaign led to a record-breaking $47 million raised by nonprofit newsrooms. This year, NewsMatch aims to galvanize $50 million in support for mission-driven local and investigative newsrooms.

Not too shabby for two months’ time.

Since 2016, NewsMatch has helped more than 260 newsrooms across the country raise more than $150 million from hundreds of thousands of people — nearly 250,000 who donated to newsrooms for the first time.

“NewsMatch gives all of us in philanthropy, at the national and local level, institutional and individual donor level, an opportunity to support trusted, nonpartisan nonprofit news outlets and leaders committed to serving their communities,” said Jennifer Preston, who conceived of NewsMatch in 2016, while serving as Vice President of Journalism at the John S. and James L. Knight Foundation, after listening to nonprofit news leaders say they were seeing an uptick in donations. 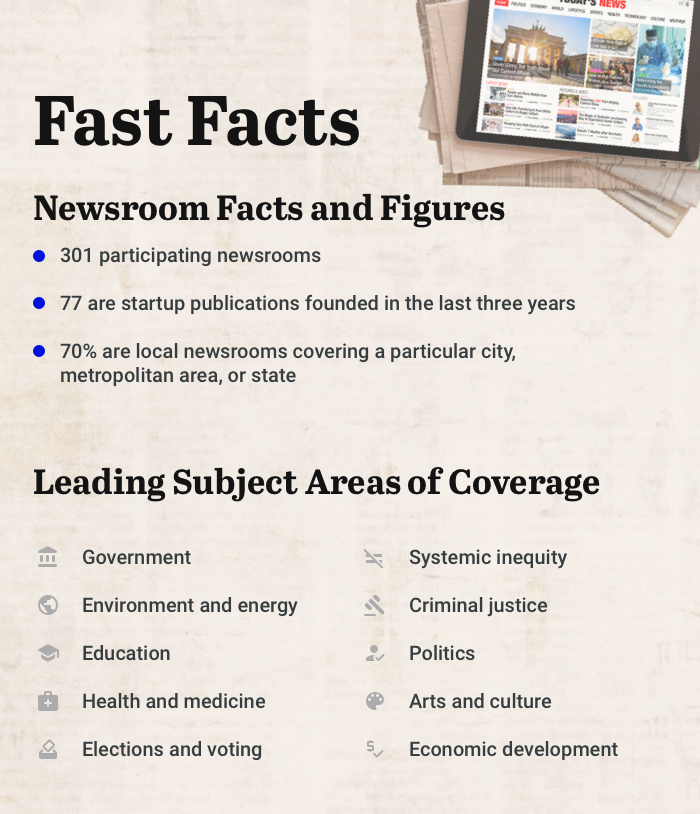 The conversation on efforts to sustain high-quality, trusted journalism is a timely one. In three days, the Biden-Harris Administration will host the first of two Summits for Democracy and bring together leaders to create an agenda for revitalizing democracy in the United States and around the world. Confronting the country’s information crisis is critical to that work, as underscored by the Aspen Institute’s Commission on Information Disorder in its final report published last month. The commission offers 15 recommendations to strengthen the country’s information ecosystem, one of which is investment in local journalism that informs and empowers. The report highlights local media’s role in securing a healthy democracy and building back trust, and calls on philanthropy to take action alongside government and tech to increase resources for the field.

For those concerned with the decline in local news and its threat to our democracy, NewsMatch is a powerful tool to maximize impact as an individual. FindYourNews.org, powered by INN, makes it easy to find newsrooms to support during NewsMatch. The platform allows users to sort by place, topic, and reporting type to find the organizations that meet their news needs, whether that’s explanatory reporting on education in Georgia (there are four) or investigative reporting on elections and voting in Wisconsin (there are six).

Many of these newsrooms are getting creative about how they participate. The El Paso Matters newsroom pledged to buy 350 meals for the city’s local food bank for every contribution of $250 received in November, and will be donating more than 17,000 meals. For December, they’ve planned a similar partnership with the Great Khalid Foundation, the nonprofit formed by the noted R&B singer from El Paso, to support efforts to buy holiday gifts for children in the region.

“This approach allows our readers to help address multiple needs in El Paso while also demonstrating that El Paso Matters gives back to the community,” said Robert Moore, president and CEO of El Paso Matters.

This is El Paso Matters’ second year participating in NewsMatch, and the newsroom surpassed its 2020 campaign total in just the first two weeks of this year’s campaign. The newsroom attributes its success in part to a local match secured early into the campaign.

Strengthening a specific outlet by building an additional local match is one of three ways NewsMatch suggests donors can deepen their investment in the campaign itself. The other two strategies are designed for those interested in supporting the field more broadly, allowing donors to fuel the movement at large by contributing to the national pooled fund, or to advance a particular cause or community by creating a special interest fund dedicated to an issue or place.

However one chooses to engage with NewsMatch, the throughline is this: Supporting your nonprofit newsroom is always a good idea. Supporting it this month is an even better one.

Jennifer Preston, who conceived of NewsMatch in 2016, is a senior fellow at the Shorenstein Center on Media, Politics and Public Policy at Harvard Kennedy School. In this Q&A, she shares more about the campaign.

Q. Why does NewsMatch exist?
Nonprofit news organizations are filling critical gaps in investigative reporting, news, and information across the country. Since 2004, 2,100 local newspapers have closed, leaving half of the nation’s counties with only one newspaper and more than 200 counties with no newspaper at all, a UNC study shows. Between 2008 and 2019, newsroom employment has dropped 51% and the pandemic has accelerated that decline.

These independent, nonpartisan news outlets produce trusted journalism in the public interest. This is key to help battle the spread of disinformation online and counter a new threat from hundreds of websites masquerading as local news and intentionally undermining the truth and our democracy.

With NewsMatch, we have a unique opportunity to help drive the critical end-of-year fundraising campaigns for nonpartisan, nonprofit journalism outlets and build audience development and fundraising capability to help them get on a path to sustainable growth.

Q. Could you give us more of the NewsMatch origin story?
At a convening of news leaders, journalists, technologists, and funders at Arizona State University in December 2016, we discussed a story that had just been published in The New York Times describing an uptick in donations for nonprofit news organizations and subscriptions at newspapers. We asked nonprofit news leaders at both small and large organizations if they were experiencing this trend. They replied yes.

At Knight, we looked to help to accelerate positive trends. We know that responding quickly can sometimes be challenging while working inside large philanthropic organizations. I was the vice president of journalism at Knight Foundation at the time. And I was lucky to work for Knight’s President and CEO, Alberto Ibargüen, who encouraged us to bring him ideas, especially when they were coming from what we were learning from the field. So, I wrote an email early the next morning -- a Friday -- with "Wild Idea" in the cover line and asked if we might consider asking our board at our December meeting on Monday to support a $1.5 million grant for nonprofit news. Alberto asked me and the Knight team to prepare a proposal presentation over the weekend for a national matching fund for nonprofit news and financial support for a national communications campaign. The board approved the grant. And a week later, NewsMatch was launched with 57 news outlets. We intentionally did not call it Knight NewsMatch because we saw the opportunity for  other foundations and donors joining a collaborative fund. The next year, Democracy Fund, MacArthur Foundation, Ethics and Excellence, and others joined the national pool.

Q. Why has it found legs in recent years? Why has it worked with individual givers?
Most nonprofit news startup founders initially focused on producing great journalism. But they soon learned that they needed to build an audience and find a business model that would lead to sustainable growth (membership, events, major donors) for them to support the journalism and serve their community in an inclusive and equitable way and with reporting that held the powerful to account.

NewsMatch gives them tools, a pooled national fund, and a community through INN to exchange best practices to outline and meet revenue goals.

NewsMatch works because it is more than an end-of-the-year fundraising campaign "pooled fund." It’s a year-long program providing capacity and capability support, resources, tools, and training for nonprofit leaders to build audience, drive membership, let their communities know what they are doing, foster community engagement, and generate revenue throughout the year.

Q. Why should individuals and families support the nonprofit news in their backyards? Why is multi-year funding important?
Independent, nonprofit journalism holds the powerful to account and ensures that communities are informed with reliable news and information to support a healthy democracy. Multi-year grants help these news outlets build the audience and recurring revenue in memberships that will support this important journalism over the long term. It is a good investment to counter the misinformation and disinformation threatening the public's health and our democracy.

Q. Do you have any advice for donors who are new to giving to nonprofit news? What should they look for? How do they determine where they should give?
The NewsMatch national funding pool intentionally supports those nonprofit news organizations that belong to INN. That is because INN requires members to adhere to the highest ethical standards in their news reporting and practice transparency about their donors. INN works hard to make sure that members are independent and nonpartisan news organizations. At the same time, there are also opportunities to support commercial local newspapers that are committed to their communities. In Philadelphia, the Lenfest Institute has led the way with the Philadelphia Inquirer and a statewide coalition of community foundations that fund a collaborative state house reporting project, Spotlight. The Seattle Times and other newspapers operate innovative approaches to covering topics from education to transportation with local philanthropic support. And Report for America works with local funders to help sponsor local journalists working at both for profit and nonprofit news sites.

Jennifer Preston joined the Shorenstein Center on Media, Politics and Public Policy at Harvard Kennedy School in February 2021 and is now working with the center’s Technology and Social Change project that is focused on addressing the crisis in disinformation. Previously, she served as vice president of the journalism program at the John S. and James L. Knight Foundation for more than six years. She oversaw a portfolio that invested tens of millions of dollars in people and projects committed to strengthening the First Amendment and sustainable models for independent journalism. The foundation’s Journalism and Democracy Initiative includes grantees such as the American Journalism Project, Report for America, the Institute for Nonprofit News, the Solutions Journalism Network, the Maynard Institute for Journalism Education, News Revenue Hub, and the Lenfest Institute for Journalism. Before joining Knight, Jennifer worked as a reporter, editor, first social media editor and senior newsroom executive at The New York Times for almost 20 years. 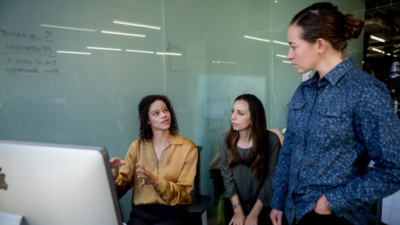 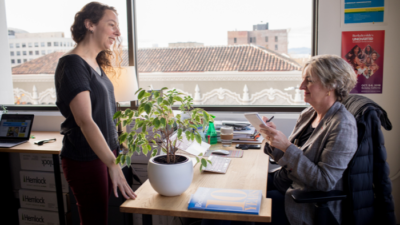 The Nonprofit Future of News: How Donors Can Help Strengthen Democracy 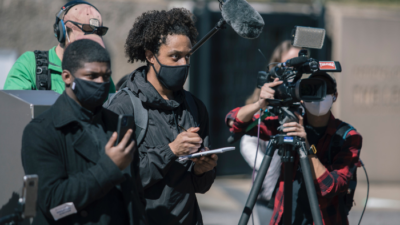