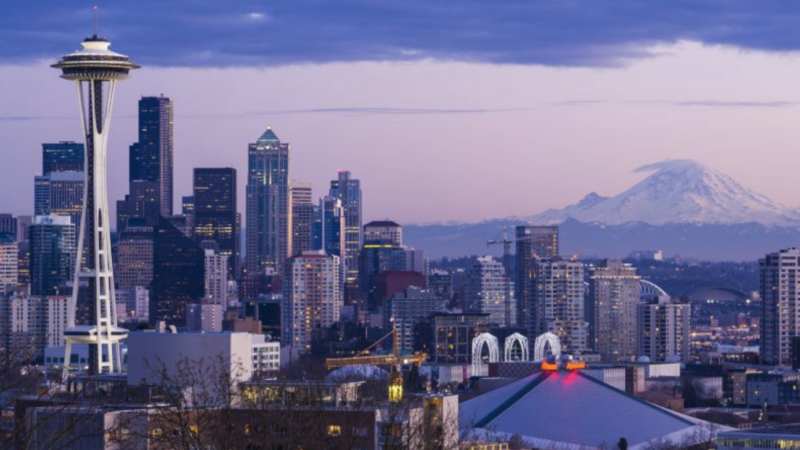 Seattle Foundation ignites powerful, rewarding philanthropy to make Greater Seattle a stronger, more vibrant community for all. Our work is part of a long tradition of community foundations throughout the country, as well as deep history of Seattle philanthropists who we’ve worked with since 1946 to make Seattle a better place for all.

During the start of World War I, the world’s first community foundation, The Cleveland Foundation, was founded by banker Frederick Harris “Judge” Goff.

Following the end of World War II, Seattle was celebrating victory along with the rest of the country while the newly expanded Boeing and other wartime industries that had fueled the economy were now taking a hit.

Working with 14 other community leaders to create a $289,000 initial investment, this first team of leaders started endowment to improve the quality of life in Seattle and beyond.

In the beginning, the Foundation primarily focused on bequests, with grants totaling $8,000 by the end of the first year. The Foundation continued to grow, providing initial investment to many organizations still thriving today: Overlake Hospital, YMCA Camp Orkila and Swedish Hospital.

Kicking off with the World’s Fair, Seattle saw the construction of the Space Needle and the Science Pavilion. The Pavilion would become Pacific Science Center, which purchased its first planetarium projector with a gift from Seattle Foundation.

During this period, Seattle introduced Forward Thrust which aimed to preserve farmland, build county parks and create initiatives like the Seattle Aquarium. Seattle Foundation, whose endowment had grown to $2.7 million, joined in with similar efforts like the Seattle Garden Club and the Ship Canal planting project.

1970s: Boeing Bust and new nonprofits to fill the gap

The 1970s began with major employee Boeing laying off 7,000 workers in one day. Nonprofits stepped up to help, with organizations like Seattle Foundation grantees Daybreak Star Center and El Centro de la Rosa, both starting through grassroots, community-led action and occupation of unused spaced.

This era saw health innovations like the emergency response care by Medic One, whose model has been replicated worldwide. Seattle Foundation also helped the Seattle Fire Department purchase some of the first mannequins for CPR classes.

1980s: Growth, the environment and the AIDS crisis

As the Seattle economy grew, so did Seattle Foundation. In 1980, Anne V. Farrell become president and CEO of Seattle Foundation as its first full-time employee. Over her 23-year tenure, she grew the endowment form $10 million to $300 million.

With the city growing, concern for its effect on the environment arose. Seattle Foundation showed its support through environmental groups like Washington Trails Association and Long Live the Kings.

In 1988 the Foundation began its scholarship program, helping philanthropists invest in the next generation of civic, business and nonprofit leaders.

As the 1990s tech boom hit, wealth came to Seattle, but not for everyone. The Foundation adapted by offering some of the country’s very first donor advised funds to help those earning the most to invest back into their community.

When the dotcom bubble burst in the 2000s, Seattle had been established as the major city to watch out for. Phyllis J. Campbell assumed leadership of the Foundation in 2004 and oversaw the establishment of the Health Community framework. Seattle Foundation’s endowment reached $470 million in 2005.

In response to 9/11 and ensuing discrimination, Seattle Foundation provided support to movements like Hate Free Zone. Following a generous donation in 2006 from the Clapp family, Seattle Foundation established the Seattle International Foundation to support local residents with international philanthropy by highlighting the global impact of nonprofits based in Greater Seattle.

With the housing crisis in 2007, Seattle Foundation worked with United Way to create the Resilience Fund — a three-year, $6 million effort to help locals most affected by the economic downturn.

In 2009, the Foundation named former Seattle Mayor Norman Rice its president and CEO who catalyzed community leadership especially around education and economic opportunity. The following year saw the launch of the Roadmap Project aimed at improving education to drive dramatic improvement in student achievement. The Foundation also incubated Skill Up, which connects employers, post-secondary training and low-income adults to support a thriving community.

Though his presidency began in recession, Rice’s leadership ended with the Foundation in high financial standing with assets of $727 million and a 12.8 percent investment return.

In 2014, Tony Mestres was welcomed as president and CEO, following a 22-year career in the technology and communications industries, primarily at Microsoft. Under Mestres, the Foundation launched the Center for Community Partnerships to focus on targeted efforts to achieve greater racial and economic equity. Collaborating with King County, the Foundation launched Communities of Opportunity to improve health, social, racial and economic outcomes by focusing on places, policies and systems changes.

Reflecting Seattle Foundation’s ongoing commitment to both data-driven and community-focused giving, the Foundation launched its brand “the heart & science of philanthropy” in 2015. Today, the Foundation’s assets total more than $800 million and each year makes more than 1,600 grants to nonprofits. Seattle continues to grow and the Foundation will continue growing along with it, igniting philanthropy to truly make this a growing and prosperous city for all.

In addition to learning and connecting with others, taking action is a key step towards becoming an impact giver. If you are interested in giving with impact for Family Philanthropy take a look at these Giving Funds, Charitable Organizations or Projects.