This overview is intended to help donors gain a deeper understanding of the U.S. education system and identify opportunities to address the root causes of inequitable outcomes for students. See the entire series. By Jocelyn Harmon

What Is High School?

High school is an exciting and formative time full of new opportunities and adventures. Young adults begin to experience more independence, while also learning to juggle new skills and responsibilities. It’s also during this period of a student’s education that they begin to consider their long-term future and how to be college- or career-ready.

Why Donors Should Care About Middle School Education

Securing a high school degree is essential to succeeding in our 21st century economy. Adults without high school degrees make much less than those who graduate and are much more likely to experience poverty and incarceration. According to the U.S. Census Bureau, “the average [high school] dropout can expect to earn an annual income of $20,241. That’s a full $10,386 less than the typical high school graduate and $36,424 less than someone with a bachelor’s degree.” In addition to impeding one’s economic prospects, dropping out of high school can hinder a student’s ability to get into college.

While high school graduation rates in the U.S. have improved considerably since 2001 -- with more than 3.5 million additional students graduating instead of dropping out --  there are still gaps. 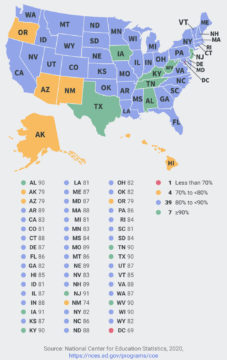 Who Is Missing Out?

There are approximately 16 million high school students and 21,287 public high schools in the U.S. While high school graduation rates are trending upward, there are still too many young people who aren’t securing their degrees. According to the National Center for Education Statistics, American Indian/Alaska Native, Hispanic, and Black Students, particularly those who are male are most at risk of dropping out.

Students who experience homelessness, come from low-income families, have disabilities, and are English learners are also more at risk for dropping out. A report from the National Center for Homeless Education shows that more than 1.5 million public school students nationwide were homeless at some point during the 2017-18 school year. Many of these students are not graduating on time. English learners, in particular, need additional and culturally responsive supports to ensure they are stay on-track and graduate on time. Schools and school districts can help here by providing teachers with the professional development and evidence-based curriculum they need to help our nation’s growing population of immigrant students achieve.

Even when they are still in school, Black and Latino students are less likely than white students to have access to the most rigorous courses. This creates another barrier for students who may not be prepared for college coursework. According to The Education Trust:

What Is Causing These Disparities?

The achievement and graduation gaps we see in high school and across the K-12 school system are caused by many factors. Here we cover two structural barriers we have to address as a nation if we are ever going to advance educational equity and academic success for all students. For a more comprehensive view of what it takes to end disparities in education, read the 2020 Building a Grad Nation Report.

One of the biggest barriers to closing achievement gaps and increasing high school graduation rates for all U.S. students is underinvestment in K - 12 public education and inequities in the way that schools are funded. The majority of K -12 funding for public schools comes from state and local governments that rely on property taxes to fund schools. This means that your zip code definitely determines your destiny when it comes to your educational opportunities.

Wealthier states can and do spend more on students who achieve better academic outcomes as a result.

States with Highest Academic Outcomes Tend to Have Above Average Spending

Poorer states spend less on students who struggle to succeed.

States with Lowest Academic Outcomes Tend to Have Below-Average Spending

Students who live in wealthier neighborhoods with lots of homeowners attend better schools and achieve better outcomes as a result, while students in high-poverty neighborhoods attend schools with less resources and worse academic outcomes. “Data show that predominantly non-white school districts (districts where 75% of more of students are non-white) receive $2,226 less per pupil funding than white school districts.” Poverty is also a proxy for race and ethnicity. Research shows that Black and Hispanic students are more likely to live in neighborhoods of concentrated poverty.

Well-funded high schools prepare students academically and emotionally and provide access to college prep through high-quality college advising and resources to take the SATs. Great schools also offer a variety of Advanced Placement (AP) and dual enrollment courses to acclimate students to the coursework they will experience in college and help them earn college credits. In some cases, taking college-level courses in high school can help students save money on college tuition. Additionally, studies have shown that students who participated in dual enrollment are more likely than similar students to graduate from high school, enroll in four-year colleges, and persist in college.

Some folks say that money doesn’t matter in education but research shows that that just isn’t true. “Greater state spending on low-income students leads to improvements in student learning in reading and math.” And according to the Center for American Progress, “when it comes to high-school completion, students attending a high-poverty school -- or schools where at least 75% of students are eligible for free and reduced-price lunch only have a 68% chance of graduating. In comparison, students attending low-poverty schools … have a 91% chance of graduating.”

Our flawed and inequitable system of financing for public education keeps kids and families trapped in poor communities with failing schools; it hurts teachers too.

The majority of states lack progressive teacher-staffing ratios ... so that students who face high poverty levels are assigned the same distribution of teachers as better-off children, or are actually in schools with fewer teachers per class compared to more affluent districts. In Florida, for example, “the poorest districts have about 25% fewer teachers per 100 students than low poverty districts.

Advocates have developed several proposals to increase equity in school funding, decrease economic segregation in schools, and do better by all students. Others, like the Alliance for Quality Education in New York, are using litigation to require states to restructure the education system.

Disparities in school discipline are also a barrier to success for some students. Even as the number of young people being incarcerated decreased by 41% from 1995 - 2010 , zero tolerance policies and racist and biased attitudes toward Black students have made them more vulnerable to harsh disciplinary practices in schools. Black students are suspended or expelled three times more frequently than white students. Additionally, Black students make up just 16% of student enrollment, but account for over 31% of school arrests.

In Pushout, her landmark book and film by the same name, Monique Morris documented the impact of these policies on Black girls, who are six times more likely to be suspended than white girls for the same infractions. In response, Congresswoman Ayanna Pressley has drafted legislation to reduce exclusionary discipline practices in schools.

Check out National KIDS Count to see how many high school students are not graduating on time in your state. Next, join the GradNation campaign and learn more about its goal to increase the nation’s on-time high school graduation rate to 90%. Finally, use the resources below to get educated, advocate, and invest for change.