Corals Have Nowhere to Hide from Climate Change 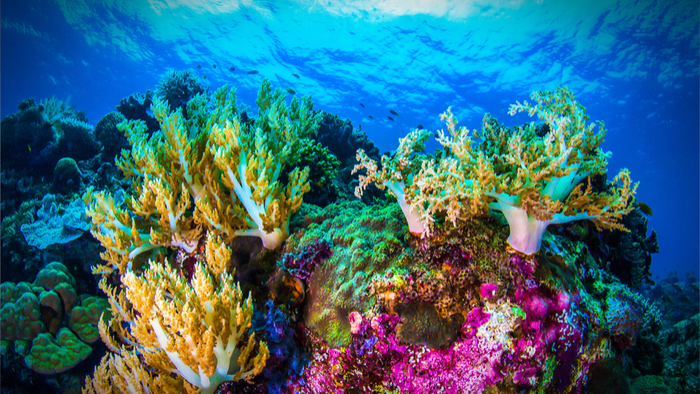 • The Atlantic explores research on coral reefs that show how deep waters may not provide a safe haven from the damaging effects of climate change.

• What can conservationists do with information like this? There is now a renewed urgency to take action on climate policies to preserve the oceans and all our natural resources.

• Read about the coral in the Great Barrier Reef.

It’s faintly absurd to be in one of the most obscure parts of the planet—a creepy zone of perpetual gloom and imminent danger, where no other humans have ventured — and have a cartoonishly squeaky voice. That’s what Luiz Rocha and his team repeatedly experienced in their attempts to study the world’s deep coral reefs.

Picture a coral reef and you’ll likely imagine a sun-drenched world lying just below the ocean’s surface. But reefs also exist beyond these shallow waters, in the so-called mesophotic zone, from 100 to 500 feet down. To study the unfamiliar animals that live in this dim world, normal scuba skills won’t cut it. Divers need special training and equipment — including larger gas tanks, rebreathers that recycle the air that divers exhale, and special gas mixes that include helium. And the helium means that anyone who enters the mesophotic zone ends up with a high-pitched squeak when they try to communicate through their rebreathers.

Why bother? Because coral reefs are among the most endangered ecosystems on the planet. Rising temperatures, acidifying waters, and emerging diseases have turned once resplendent reefs into ghostly dead zones; in just the past two years, half the corals in Australia’s mighty Great Barrier Reef have died. As the calamity worsens, some scientists have looked to mesophotic reefs for hope. If shallow species also live farther down, where the harms inflicted by humans are presumably weaker, then these deep waters could act as refuges for the shallow species — sanctuaries where corals could wait out the perils that threaten them up above. “That’s something everyone assumed is the case,” Rocha says.

But according to his work, that assumption is ill-founded. In one of the first thorough studies of mesophotic reefs, Rocha and his colleagues have shown that these habitats have very different communities of fish and corals than their shallower counterparts. “To me, saying that deep reefs are a refuge for shallow reefs is like saying that the savannah is a refuge for the rainforest,” Rocha says.

Read the full article about how coral reefs can’t escape climate change by Ed Yong at The Atlantic.