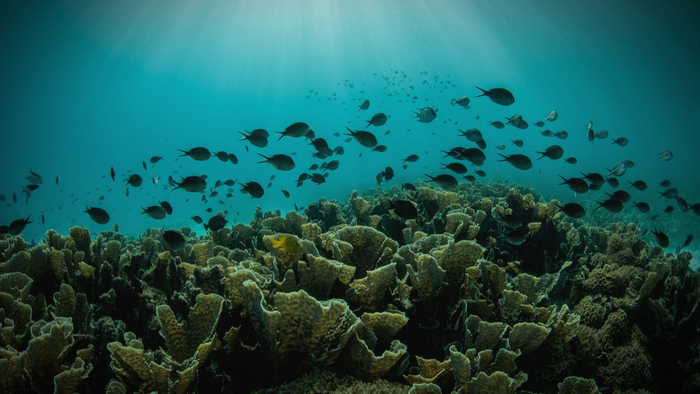 • Scientists are studying tiny calcified formations called otoliths inside of fishes’ ears to learn about the impact of climate change on fish populations.

• The authors note that this kind of research is extractive and expensive, but it’s one of the only ways to understand the effects of climate change. How can donors play a role in funding specific climate change research?

• Read about how warmer seas will limit food supply from fisheries.

Climate change affects all life on Earth, but it poses unique challenges for aquatic species. For example, as water warms it holds less dissolved oxygen than cooler water. As a result, the world’s oceans, coastal seas, estuaries, rivers and lakes are undergoing a process known as “deoxygenation.”

When dissolved oxygen levels fall to about 2 milligrams per liter – compared to a normal range of roughly 5 to 10 mg/L – many aquatic organisms become severely stressed. Scientists call this low oxygen threshold “hypoxia.”

Globally fisheries generate US$362 billion annually. Scientists are already forecasting loss of fish biomass due to warming water. But can we measure effects on fish directly?

For some climate change impacts, the answer is yes. Increasingly, a window on the secret lives of fishes is opening up through study of tiny, calcified formations inside fish skulls called otoliths – literally, “ear-stones.”

Many people may be surprised to learn that fish have ears, and in many cases an acute sense of hearing. Modern fishes have three pairs of otoliths that form inside small sacs underneath the semi-circular canals of their inner ears and function as part of the fish’s hearing and balance system. (Species with skeletons made of cartilage, such as sharks and rays, lack otoliths.)

Otoliths are made of calcium carbonate, mostly in a form called aragonite, which is similar to the material that makes up hard corals and clam shells. Otoliths can be smaller than sand grains or as large as a fava bean. They grow as the fish grows throughout life, which makes them interesting for fish biologists. In environments where water temperature changes seasonally, sequences of opaque and translucent zones form in fishes’ otoliths over the course of a year, like tree rings. And amazingly, young fish deposit tiny increments on a daily basis.

This discovery revolutionized understanding of the early life histories of fish, because these increments – both daily and annual – are related to fish growth. Fish otoliths are widely regarded as “lifetime archives” of age and growth histories.

I have spent much of my career studying otoliths, researching not only age and growth but also their chemical composition. Otoliths’ aragonite crystal lattice structure permits various trace elements to substitute for calcium as the otolith layers are deposited. In addition, most elements in the otolith exist as different isotopes – atoms of the same element that have slight mass differences because they contain varying numbers of neutrons.

Otoliths in a sense are analogous to cockpit black-box recorders. By studying them, we can take advantage of time-keeping properties and changes in chemistry as fish grow and experience different environments. Although we have been able to work out some of the causal mechanisms, we are still learning how to interpret their “codes.”

Most of the elements incorporated into otoliths are dissolved in seawater, which flows over fishes’ gills. From there the chemicals enter the bloodstream.

One of the commonly measured trace elements is manganese, which dissolves when oxygen levels become very low. When I studied Baltic Sea cod otoliths in 2009, I wondered why I saw recurrent patterns of elevated manganese in rings deposited during summertime. Realizing one day that the Baltic Sea is one of the world’s largest “dead zones,” I put two and two together and proposed that manganese could be a hypoxia tracer, recording an individual fish’s exposure to low-oxygen waters.

A group of us were able to trace evidence for this hypothesis back to the Stone Age. Further work demonstrated that this tracer was usable in many aquatic ecosystems.

Recently, Swedish University of Agricultural Sciences marine ecologist Michele Casini and I used manganese to track Baltic cod hypoxia exposure and combine it with estimates of growth history. We found that compared to healthy cod with little or no hypoxia exposure, fish most heavily exposed to hypoxia were 39% smaller in length by age 3 and weighed 64% less. Weight translates into fish fillets, so this is a serious consequence.

A different trace element, magnesium, is not hypoxia-sensitive, but the rate at which it is incorporated into otoliths varies with the fish’s growth rate. In fishes tested so far, it also appears to be related to metabolic rate.

Using this insight, Casini and I found a very strong, positive relationship between otolith magnesium and body condition of Baltic cod. This was remarkable, since we had measurements of the fishes’ body condition from only a single point in time. But lifetime magnesium uptake suggests that fish in poor condition upon capture may have been doing poorly through much of their lives. Hypoxia, disease and starvation appear to be the causes for reduced magnesium levels in Baltic cod otoliths.

In an exciting recent finding, a group of scientists in Denmark, England and Norway analyzed the ratio in otoliths between two carbon isotopes – carbon 13 and carbon 12. This ratio is partly affected by dissolved carbon in the surrounding water, but importantly, also by metabolic carbon from the fish’s respiration.

Combining laboratory experiments, modeling and observations on wild fish, the team determined that they could parse the C-13/C-12 ratio due to metabolism, and relate that directly to oxygen consumption by the fish. Although more research is needed, it is possible that both this carbon ratio and magnesium may ultimately serve as “lifetime respirometers” that can be related to stresses on fishes from warmer water, hypoxia and possibly ocean acidification. This would enable scientists to test model projections of, for example, reduced growth in warming seas.

Along with calcium and carbon, oxygen is the third major element in otoliths. Ratios of the oxygen isotopes O-18 to O-16 are sensitive to both salinity and temperature. If salinity is more or less constant where a fish lives, the ratio in otoliths serves as a built-in thermometer.

Scientists are exploring archival collections of otoliths going back as far as 100 years for these signals, and are finding that fossil otoliths provide records of variable temperatures through eons. In a paper combining oxygen and carbon isotope analysis, European and U.S. scientists have shown that Atlantic bluefin tuna otoliths provide a record of carbon dioxide absorption in the Mediterranean Sea.

By sampling the first year’s growth in otoliths from tuna of varying ages, this group was able to reconstruct a record from 1989 to 2010. They found no temperature change, but detected a decline in stable carbon isotope ratios that corresponded to ocean uptake of carbon dioxide, an indication of acidification.

Otolith chemistry analysis is a rapidly expanding field, but we have already learned a great deal about climate change impacts from the “chemical log-books” that otoliths contain. Although this work is exacting and expensive, it is the best way to understand direct impacts of climate change on fish populations.