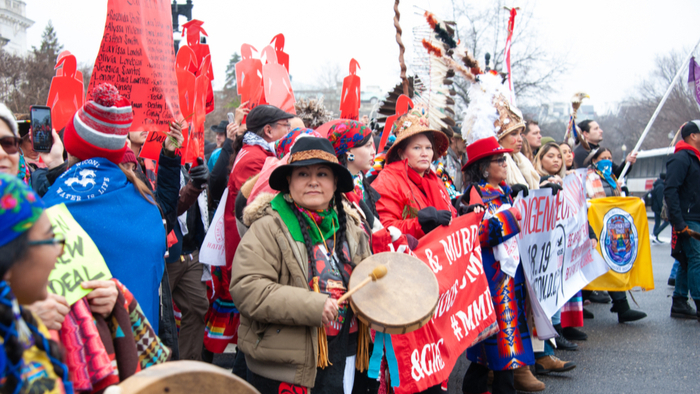 • María Paula Rubiano A. reports that for the first time twenty-three Indigenous organizations will join this year’s IUCN’s General Assembly as members.

• How can you effectively share power with Indigenous peoples to advance conservation?

The General Assembly of the International Union for Conservation of Nature, or IUCN, will gather next week to shape a collective strategy to protect the world’s increasingly at-risk flora and fauna. Representatives from more than 217 nations and territories, 18,000 experts, and 1,400 NGOs, businesses, and scientific institutions will vote on recommendations and motions that will mobilize money and build political momentum for global conservation efforts. And now, for the first time in the IUCN’s 73-year history, Indigenous peoples will finally get a seat at the table.

Twenty-three Indigenous organizations, representing groups from every continent, will join this year’s IUCN’s General Assembly as members, meaning that they can introduce motions; vote for or against resolutions and recommendations; and participate in working groups.

“We’ve been fighting for 40 years to be included in the U.N.’s international system and other international spaces to defend the identity, culture, and lands of Indigenous peoples,” said José Gregorio Diaz Mirabal, who leads the Coordinator of Indigenous Organizations of the Amazon River Basin, or COICA, a group that congregates the biggest national Indigenous associations from nine Amazonian countries. “[We know that] if we don’t go [to international meetings], solutions will not come to us.”

In addition to COICA, other new Indigenous members to the IUCN include the Highlanders Association from Cambodia, the Indigenous Peoples of Africa Coordinating Committee, and the Inuit Circumpolar Council, from Canada, among others.

COICA plans to introduce a new and urgent motion — the main mechanism to influence IUCN’s policy — to the General Assembly on Friday, proposing a target of preserving 80 percent of the Amazon rainforest by 2025. The plan, which they have called “Amazonia por la Vida,” or Amazonia for life, requires that the region’s governments legally recognize as autonomous 100 percent of Indigenous lands in the Amazon, ban deforestation-linked activities, and suspend all future licenses for mining, oil extraction, and other extractive industries in the rainforest. The motion also proposes that banks and financing partners should prioritize funding for projects that include Indigenous peoples in the region, and respect their human rights.

Read the full article about Indigenous conservation leaders by María Paula Rubiano A. at Grist.