Abuse, Discrimination, and Wage Theft: It’s Time to Address the Migrant Worker System in the U.S. 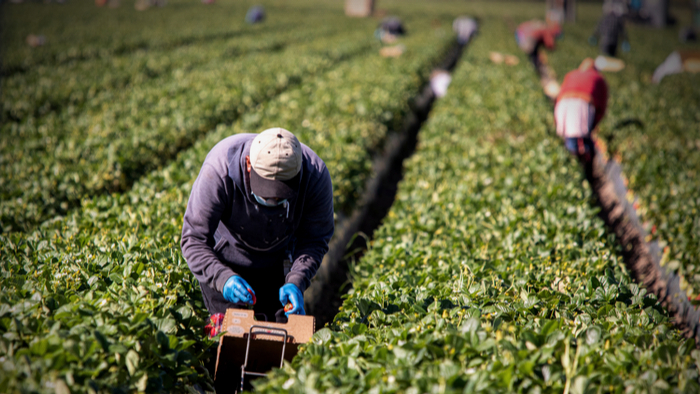 Despite the numerous pandemic-related disruptions we’ve faced over the last year and a half, one aspect of American life has remained generally consistent. Across the country, individuals and families have been able to access fresh produce at their supermarkets thanks in large part to thousands of migrant and immigrant workers who make up 75% of the agricultural labor force. However, despite being deemed “essential workers,” little has been done to advance these workers’ rights, protect them from the virus, or improve working conditions. New legislation was recently introduced that would expand and modify the current H-2A Migrant Worker program, but in order to address long-standing inequities and mistreatment, we must have an understanding of who migrant workers are and the fundamental shortcomings of the existing system.

The H-2A visa program is designed for U.S. employers seeking temporary migrant workers for agricultural labor when there is a demonstrated lack of citizen workers. The H-2A program has been steadily increasing year-over-year with U.S. Citizenship and Immigration Services authorizing approximately 275,000 H-2A positions for the fiscal year 2020 despite drastically reducing the number of family visas issued in the same year.

Though the Department of Labor mandates certain protections for migrant workers, the structure of the H-2A visa program creates a disproportionate power imbalance as workers are forced to rely upon employers for housing, food, immigration status, and wages. Farmworker Justice’s report “No Way to Treat a Guest” outlines the abuse within the H-2A visa system including, “social and geographic isolation, lower than advertised wages, less work than promised, dirty and dilapidated housing, dangerous working conditions, and even forced labor or slavery.” Farmworker Justice estimates that, “average and median farmworker household incomes ranged from $20,000 to $24,999” with about 30% of farmworkers living below the poverty line. When workers try to organize themselves for better working conditions, employers frequently terminate contracts, effectively deporting migrant workers.

Women in the migrant workforce are often disconnected from their own support system and subjected to pay gaps, gender discrimination, and sexual violence. Wage theft is a common phenomenon amongst migrant women. According to Southern Poverty Law Center, “many women said their pay stubs routinely show far fewer hours than they actually worked. If they question their paychecks or ask for a raise, they are ignored or fired, to be replaced by other desperate workers waiting in line. Although these practices are brazenly illegal, employers know that most of these women will not come forward to complain about violations of the law.” Additionally, it is not unusual for employers to officially enroll the man of a family while the wife and children work undocumented, leaving women and children especially vulnerable to abuse. Despite the realities reported by women working on the ground, government data regarding pay disparities is difficult to identify as the Department of Labor does not disaggregate data by gender. Justice for Migrant Women is advocating for reform of the National Agricultural Worker Survey (NAWS) so that activists can better understand the extent of the gender pay gap amongst migrant women and children.

Organizations also have documented reports of abuse faced by migrant workers. “Angela G., a single mother in California, who told Human Rights Watch that she was raped by a supervisor who threatened her daily afterward.” Victims are often preyed upon by, “foremen, supervisors, farm labor contractors, company owners, and anyone else who has the power to hire and fire workers as well as confer certain benefits, such as better hours or permission to take breaks.” Undocumented women fear that reporting violence to local authorities will result in their own deportation and farmworkers who report sexual violence to their employers are often met with retaliation, such as severed hours or blacklisting.

Impacts of COVID-19 on Migrant Workers

This past year has proven to be especially difficult amid the pandemic. With migrant workers sharing barrack-style housing or sharing van rides to job sites with dozens of other workers, social distancing is nearly impossible. It is both typical and legal for employers to determine workers’ wages per piece of product that is produced and enforce strict production quotas, meaning that if workers are sick or do not work, they will not get paid. In California, during wildfire season, workers are forced to work through both the pandemic and the toxic smoke in excruciating heat. Such working conditions coupled with the fact that undocumented workers do not have access to healthcare have led to early reports of excess mortality amongst migrant workers. In 2020, the Mexican government saw a 68% increase in the number of requests to repatriate bodies from migrants, many of whom were agricultural workers.

The Future of the H-2A Program

The continued popularity of the H-2A program follows a longstanding tradition of American agriculture exploiting foreign labor to maximize profit. Employers have long advocated for increased access to foreign labor in large part because workers lack full employment rights and can be paid less than citizen workers. Because there is no legal pathway to citizenship for undocumented or H-2A workers, they are unable to vote and can be terminated for attempting to organize for better conditions or pay. U.S. employers are reliant upon this captive workforce to maximize productivity while keeping costs as low as possible even to the detriment of citizen workers. Advocates at Farmworker Justice warn that expansion of the H-2A program without providing migrants legal pathways to citizenship will only further endanger workers, perpetuate discrimination, and fail to provide permanent solutions for immigrant workers.

What Donors Can Do:

Our migrant workforce has risked their health, safety, and lives to ensure that Americans continue to stay fed throughout the pandemic. The following are some ways that donors can give back to the migrant workforce:

Listen to Activists on the Ground: The best way to support migrant workers is to listen to the demands of labor and immigration activists working directly with migrants to push for better working conditions and pathways to citizenship. Organizations such as Farmworker Justice are fighting to end discrimination against migrant agricultural workers.

Donate to Immigrant Relief Funds: Covid-19 has been difficult for the migrant and immigrant community, especially for undocumented workers who are ineligible for any of the government assistance programs. These funds, vetted by Giving Compass, are working to ensure that the immigrant community has access to immediate resources to help ease the burden of the pandemic:

Learning with others and benchmarking are key steps towards becoming an impact giver. If you are interested in giving with impact for Human Rights, take a look at these events, galas, conferences and volunteering opportunities to connect with individuals like you.