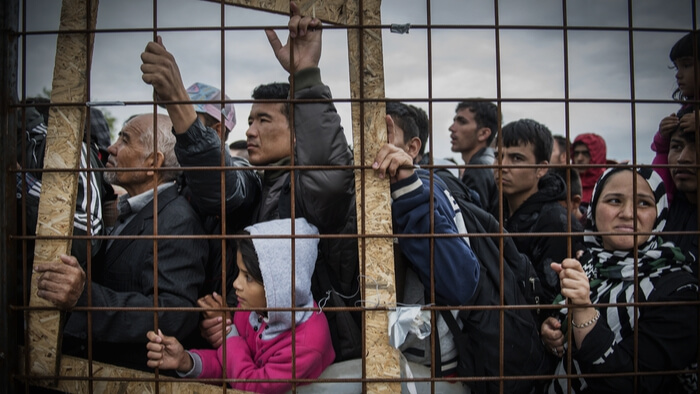 • Mahlet A. Woldetsadik explains that Syrian refugees, especially women, face the threat of violence in their own families and organizations are trying to effectively offer help and resources.

• How can organizations make an impact when language and cultural barriers exist and create a disconnect between refugees and aid organizations?

• Some organizations are coming up with creative ways to engage Syrian refugees in their local economy by giving them entrepreneurship opportunities.

As the crisis in Syria enters its eighth year, more than 58 percent of the nation’s refugees in neighboring Lebanon live in extreme poverty, unable to meet basic survival needs.

This has hampered refugees’ access to work, health care, and schooling for their children. The lack of official documentation has also made children more vulnerable to child labor and child marriages. They also are more subject to abuse, with 78 percent of children younger than 18 experiencing violent discipline, including physical and psychological abuse, according to the survey.

Refugee women and girls no longer have access to family resources and social services they had in Syria. Instead, a 2017 United Nations survey (PDF) found that almost 19 percent of households were headed by women, who have become breadwinners for their families.

For the Syrian refugees, the reversed gender roles in their families and their increasing poverty has only worsened interpersonal tensions and increased the risk of domestic violence. More than 70 percent of reported domestic violence incidents are perpetrated by family members, and only one-third of survivors seek help.

In the last two years, aid groups have offered refugee women greater information about services to prevent and deal with domestic violence. But Masri said that knowledge isn’t translating into refugee women using services, for various reasons that include violence possibly becoming a norm in some displaced communities.

This has challenged organizations like ABAAD, which sometimes encounters community resistance to its efforts to deliver assistance services to Syrian refugees. This led the response team to reconsider its approach and address issues holistically: The goal now is to provide services but also address community attitudes toward gender-based violence by involving men as well as religious leaders in all of the organization’s activities.

Read the full article about how to tackle gender-based violence in Syria by Mahlet A. Woldetsadik at RAND.

Learning and benchmarking are key steps towards becoming an impact giver. If you are interested in giving with impact on Immigrants and Refugees take a look at these selections from Giving Compass.