The Wealth Gap is Becoming a Giving Gap 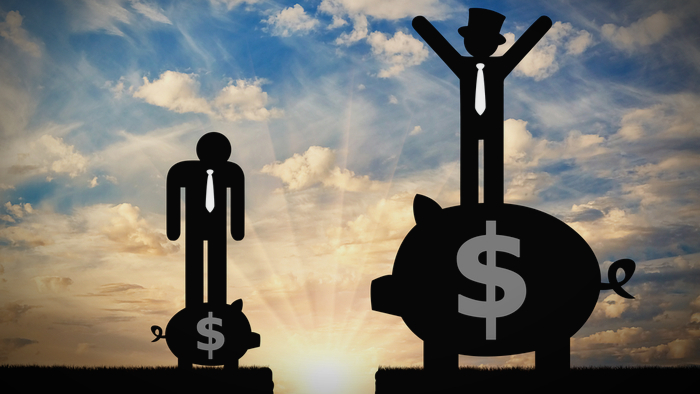 Giving in the U.S. has long correlated with the up and down pattern of the nation’s economy. But what about an economy in which the most glaring “trend” is not an overall rise or fall, but a growing gap between those at the top and bottom? As wealth and income become increasingly unequal in this country, will patterns in giving follow this dramatic economic bifurcation?

The answer, it seems, is yes. Recent research shows that while total giving is on the rise, the number of households that give is declining (Rooney, 2018). This means fewer people are giving a bigger slice of the charitable pie. And considering the rapidly increasing economic inequality in America today, we all need to pay more attention to the growing disparity in giving power.

The level of economic inequality in the U.S. (and increasingly, around the world) is now as high or higher than during the fabled “Gilded Age” of the late 19th and early 20th centuries. In fact, one report claimed that the three richest Americans — Jeff Bezos, Bill Gates, and Warren Buffett — are now worth more than the entire bottom half of the U.S. combined (160 million people) (Collins and Hoxie, 2015). Of course, it was during that previous Gilded Age that elite philanthropy — by the likes of Andrew Carnegie and John D. Rockefeller — emerged as a major source of, and influence on American giving.

Many observers are now saying we are entering a “new Golden Age of Giving” to match our new Gilded Age of wealth. And it looks as if this new Golden Age will, like before, be dominated by the wealthiest of donors.

We can see this in the attention — both positive and negative — paid to the biggest donors on the national stage. We closely scrutinize the efforts of the biggest foundation in the history of the world — the Bill and Melinda Gates Foundation — while anxiously awaiting clues from the man who replaced Gates as the world’s richest individual, Jeff Bezos, about how he will disperse his philanthropic largesse.

New books like Rob Reich’s Just Giving (2018), and Anand Giridharadas’ Winners Take All (2018) critique the power of mega-donors and call for a renewed democratization of giving, one where lower- and middle-income donors have a voice and a collective influence on charitable causes and outcomes. Simultaneously, many worry that new federal tax policies will exacerbate this giving gap even further, because the law eliminates the charitable deduction incentive for as many as 21 million, mostly middle-income taxpayers (Gleckman, 2018).

So what does this mean for the future of the philanthropic sector? For one thing, nonprofits will need to prioritize major gift fundraising even more than before, while also navigating even more treacherous waters in sustaining relationships with their biggest donors (whether they be foundations, individuals, or corporations). The increased power that major donors have in an unequal giving landscape is one of the chief concerns raised by the democratic critiques of mega-giving.

At the Johnson Center, we expect this new Golden Age will also require even more intensive and thoughtful efforts to provide high quality donor education, especially to those elites who are just beginning their philanthropic journeys. The effectiveness and vitality of philanthropy in an increasingly unequal world will require donors who understand and value that goal – and who approach their outsized giving role seriously, humbly, and with great care for all involved.