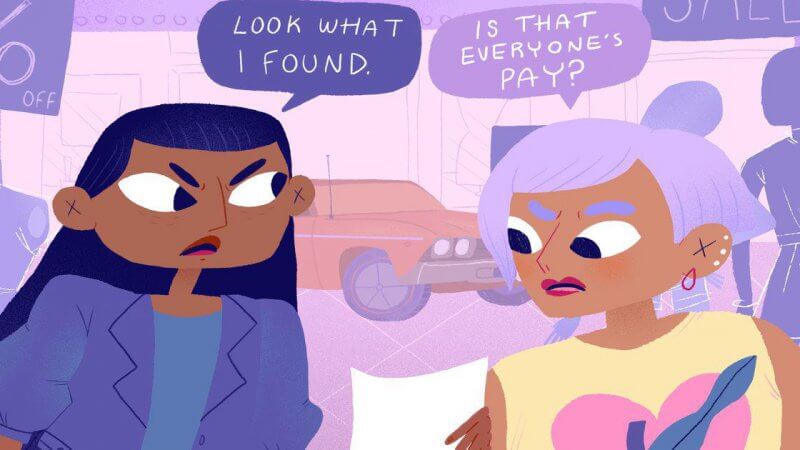 Jane Friedhoff is a riot grrrl game developer. What does that mean? She creates power fantasies for women through the joy of unadulterated play.

Practically every woman who’s ever joined the workforce understands the experience of having their work undervalued. So for Freidhoff, “I’d rather make something for them that skips the didactic stuff — something that’s funny, and cheeky, and lets you stomp all over it instead.”

That unadulterated raging against the machine is what defines Friedhoff’s games.

In Lost Wage Rampage, two shop girls take back what’s theirs by stealing and wreaking havoc on the place to reclaim the profits that the store made from underpaying them.

In her previous game, Slam City Oracles, you play as two similar female avatars who destroy environment around them through the sheer force and power of their bodies.

In a world where we feel starved for female power, fantastical or real, Friedhoff’s games don’t just stand out. They bring you joy as you face the most demoralizing truths of our oppression. They offer a virtual space that we can use as a refuge — or at least a shortcut — from the power imbalances of a patriarchal system.

Read the full article about the female empowerment video games by Jess Joho at Mashable.

If you are looking for opportunities to take action and give money to Quality Employment, here are some Giving Funds, Charitable Organizations and Projects aggregated by Giving Compass where you can take immediate action.