To ensure a strong democracy in the future, we must ensure that young people are engaged now, perhaps even before some of them can vote.

Civic participation for most young people begins in the classroom. However, social studies classes that teach the core components of civic action are dwindling. Rather than learning essential lessons on advancing civil society, students are pushed toward standardized testing and memorizing history facts. Sarah Stitzlein at The Hechinger Report says,

Instead, social studies classes should be providing students opportunities to make connections between their lives and the knowledge they learn in class. This requires skills of political critique, skepticism, critical thinking, consideration of alternatives, weighing of evidence and recognition of complexity. And students should engage with real-life examples of citizens actively employing such skills in political and civic life.

Fortunately, there are programs, coalitions, and entire school networks that are driving progress in civic education, and might be the right place for donors to investigate more:

Education can have an impact on the future of democracy. In the United States, civic education, in particular, can lead young people to feel empowered and inspired to make choices that will affect them in the future:

A long-standing theory in political science argues that education is a key determinant of the emergence and sustainability of democracy, because it promotes political participation at the individual level and fosters a collective sense of civic duty. 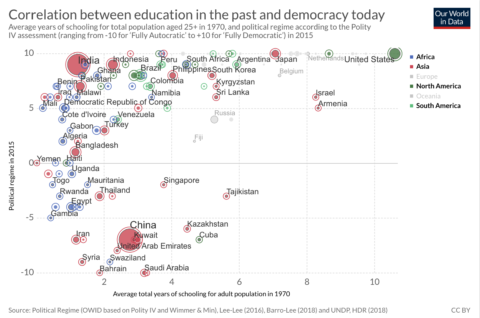 Our World In Data

Supreme Court Justices Sonia Sotomayor and Neil Gorsuch discussed with CBS News the importance of schools returning to an educational emphasis on civics education, a focus lost amid the rise of STEM education that is needed as America’s future increasingly lies in the hands of voters who no longer have a clear understanding of how the government functions.

Some justices have even gone as far as to create their own organizations that instill civics education lessons. For example, Sandra Day O’Connor founded iCivics in 2006, which makes the core components of civics “relevant and remarkably effective’” through interactive online games.

Other democracy initiatives funded by philanthropists include The Democracy Schools Initiative, backed by the McCormick Foundation, and helps students understand how to participate in the democratic process.

Donors should consider how investments in future generations can advance our democratic institutions later on. PACE's report, Youth Civic Engagement for Health Equity and Community Safety: How Funders Can Embrace the Power of Young People to Advance Healthier, Safer Communities for All, says,

Investments in youth yield positive returns over a longer period and on a more consistent basis because young people master the tools of effective democratic practice earlier and can deploy these tools over a longer lifespan.

Below are some key takeaways from this report. Funders can play multiple roles in both strengthening youth voice and understanding where communities need more support: 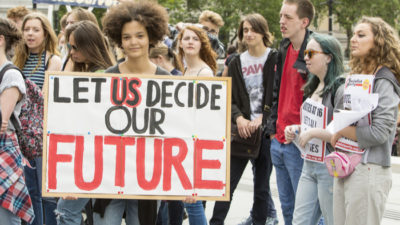 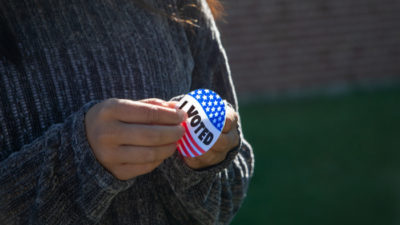 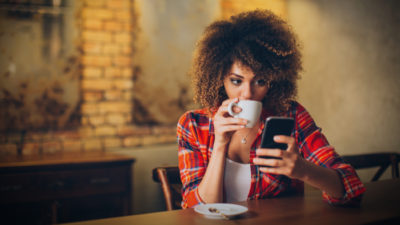