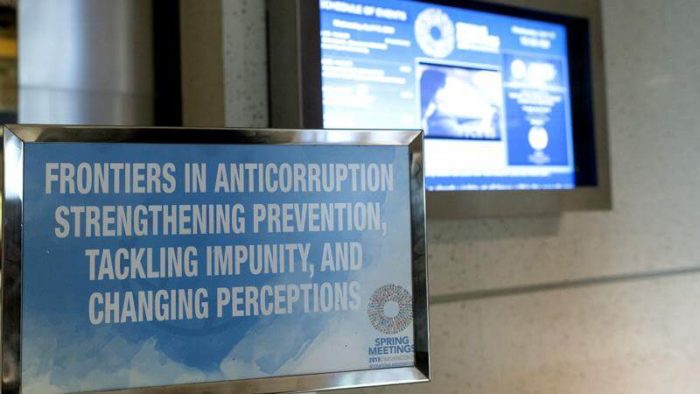 • Talk of corruption at the 2018 World Bank Spring Meetings produced a collection of suggestions on how to best address the issue, including empowering companies and people to report corruption.

• How can philanthropy be part of the solution? Where has corruption been effectively curbed through policy change?

1.  Empower companies to report corruption:
Peter Solmssen, former general counsel of Siemens AG, said that contrary to perceptions, corruption is bad for business and that his company actually performed better once it “cleaned up.”

“Corruption is dangerous and expensive, and it soaks up all the margins you make,” he said, adding, “so we are not interested in participating and we are so happy the World Bank is taking a leadership position [on corruption].”

2. Technology can help but it is not the solution
Former public prosecutor in South Africa, Thuli Madonsela, who authored the controversial “State of Capture” report on corruption in her own country, underlined the important role technology can play in fighting corruption. She said that that cell phone data was regularly used as part of her office’s corruption investigations.

3. Empowering actors to use the tools
Academic and journalist Alina Mungiu-Pippidi, from the Hertie School of Governance in Berlin, agreed that technology, including platforms like Facebook, can help drive the kind of social action needed to create noncorrupt governments.

5. Leveraging citizen engagement to combat corruption
Citizens need to be empowered and educated as part of drives to stamp out corruption, Madonsela said.

6.  New models for spending seized assets
“Citizens will not get serious about working on corruption unless they see a better result coming from the capture of corrupt assets than they are seeing now,” according to Lester Salamon, director of the Center for Civil Society Studies at Johns Hopkins university. Currently, these assets are put back into government agencies and flow back into corruption, he said during the question and answer session.