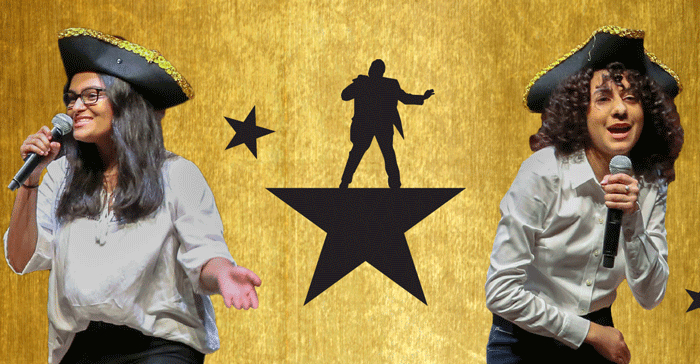 Twenty minutes before curtain, an argument is breaking out backstage at the Richard Rodgers Theater in New York City. I’ve just asked three teenagers, Crystal, Aisha, and Ishrat, if they would side with Benjamin Franklin or his loyalist son, William, on the American Revolution.

“I would go with William Franklin,” says Crystal. Ishrat disagrees: “I’d be a patriot, absolutely.” She turns to Aisha to hear her opinion. To her shock, she’s also on the loyalist side. “Only people in the high ranks wanted war,” Alicia explains. She thinks that if she’d lived during the run-up to the Revolution, “I wouldn’t be high class, I’d be working class.”

“But what about the Boston Massacre?” Ishrat asks, dumbfounded.Our conversation is cut short. The three need to go onstage and perform their original song—about the tension between Franklin and his progeny.

Nearly 250 years after British muskets were fired on King Street, the Gilder Lehrman Institute of American History, supported by the Rockefeller Foundation, is using its Hamilton Education Program—known as EduHam—to get young Americans worked up about historical events.

Read the full article at The Philanthropy Roundtable.

Learning and benchmarking are key steps towards becoming an impact giver. If you are interested in giving with impact on Arts and Culture take a look at these selections from Giving Compass.

For a long time Alexander Hamilton was viewed as a stepchild among the founding fathers, rarely studied. Not so now, thanks to two donors.