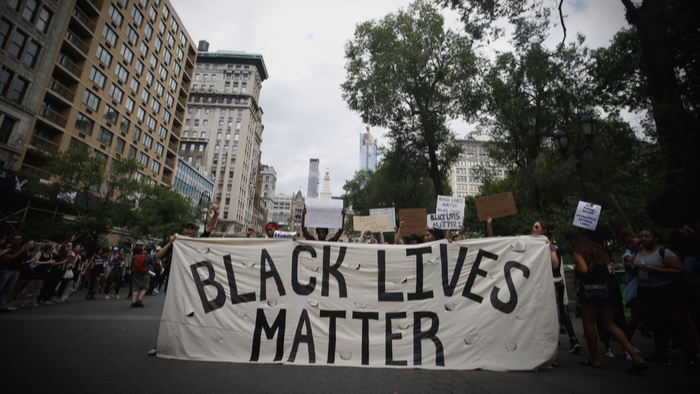 We Stand in Solidarity: Funders for Justice stands in solidarity with protestors in Minneapolis, Los Angeles, and in cities across the country, fighting for the lives and freedom for all Black people. We know that communities are powerful, and will dream and fight for the transformative justice in which together we create the new world we all need. As funders, our mandate is to fund communities rising up against state violence, and to continue to fund as communities build the power and momentum for long-term change.

We Must Continue to Challenge White Supremacy: While police killed unarmed Black people over and over again, we witnessed no police response to armed white nationalist posted in front of state capital buildings and yelling in the faces of security guards, demanding an end to shelter in place because they wanted to get a haircut and go out in public without a mask.

Stand with Black Women Essential Workers: Breonna Taylor was a young Black woman who was an EMT – an essential worker already risking her life during a pandemic. Yet we repeatedly witness evidence that the state does not protect or respect the people, especially Black women, risking their lives to save others. Essential workers are already facing dangerous conditions, with extremely limited protection equipment, low pay, often dangerous commutes to work, and then in turn endangering their families. That Breonna was one of the latest casualties of state violence is profoundly painful.

How to Support Protestors: We encourage you to fund communities directly, including at times when groups are not able to fill out even a short proposal or form because they are leading protests in the streets. We encourage you to give now however your foundation is able – including getting creative in mobilizing resources – perhaps to use your foundation’s expense account to send money for needed supplies like water and food. And, we encourage everyone to make a personal donation, because as FFJ members we all come to the work we do as the full people that we are: part of communities fighting in resistance, part of communities fighting for survival, part of communities taking action in solidarity.

Invest/ Divest Now: While millions of local dollars are cut from city budgets – in youth programs, health services, and education, among others – due to shortfalls, the police unions/associations continue to push for more money and more police. Yet police are not saving people in this pandemic – they are policing, fining, and sending people to jail – mostly Black people. The federal administration has refused to send more supplies and funding to medical workers and other frontline workers, while increasing funding to police-related spending and private security guards.

We All Have A Mandate: Philanthropy’s mandate to support communities in living healthy and free lives means funding both the public infrastructure that keeps communities safe – like health care, housing, and education –  and funding the people, organizations, and the movements rising up against police violence and building power to defund the police, prisons, ICE, and detention centers. Philanthropy must support divest/invest campaigns and other abolitionist strategies, because nothing the police do is meant to ever keep communities of color safe. Now is the time to divest from the police, when cities are cutting budgets and need the funding for community wellness more than any other time. (Check out FFJ’s divest/invest resource for funders and consider how you want to support community safety and justice.)

Organizations that are supporting protestors and Black folks organizing for Black Lives in Minneapolis:

By the Funders for Justice Co-Chairs and Staff.

If you are interested in Crime and Safety, please see these relevant events, training, conferences or volunteering opportunities the Giving Compass team recommends.